Transforming Data in the ELT paradigm

What is data transformation?

Data transformation is a process that changes the structure of the existing data into some other structures (thus ‘transform’).

Common use cases of data transformations include: 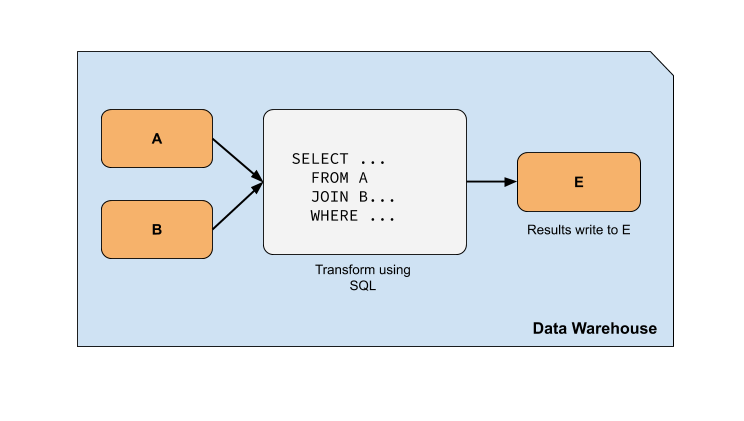 Example of transformation that happens inside a data warehouse using SQL

Why do I need to transform data?

Raw data that is piped into your data warehouse is usually in a format designed for storing transactional information. To analyze this data effectively, a transformation step is needed to make it easier to work with. Some people call this ‘data modeling’. We will talk about modeling in the next chapter, but note here that data transformation includes more than just modeling.

In the past, data transformation was often done by an ETL tool, before the loading process into the data warehouse. This meant significant data engineering involvement, as it was the engineers who created and maintained such transformation pipelines. The pipelines were also often implemented in some programming or scripting language.

It is no accident that we introduced the concept of ELT instead, which has gained traction alongside the growth of more powerful data warehouses. In this paradigm, data is loaded into a data warehouse before it is transformed. This allows us to do two things.

First, it allows us to write transformations using SQL alone. A transformation is thus the creation of a new table that will be created within the same data warehouse, storing the results of that transform step.

Second, it allows analysts to write transformations. This removes the dependency on data engineering, and frees us from building and maintaining pipelines in external tools. (We’ve already covered this in 2.3 ETL vs. ELT - What’s the big deal?, so we recommend that you read that if you haven’t done so already.)

Imagine that we’re running a hotel booking website, and want to create a summarization of daily bookings according to a few dimensions. In this case, we want to look at dimensions like country, as well as the platform on which the booking was made.

Our raw bookings data would look like this after being loaded into the data warehouse:

We want to transform them into a bookings_daily table like so. 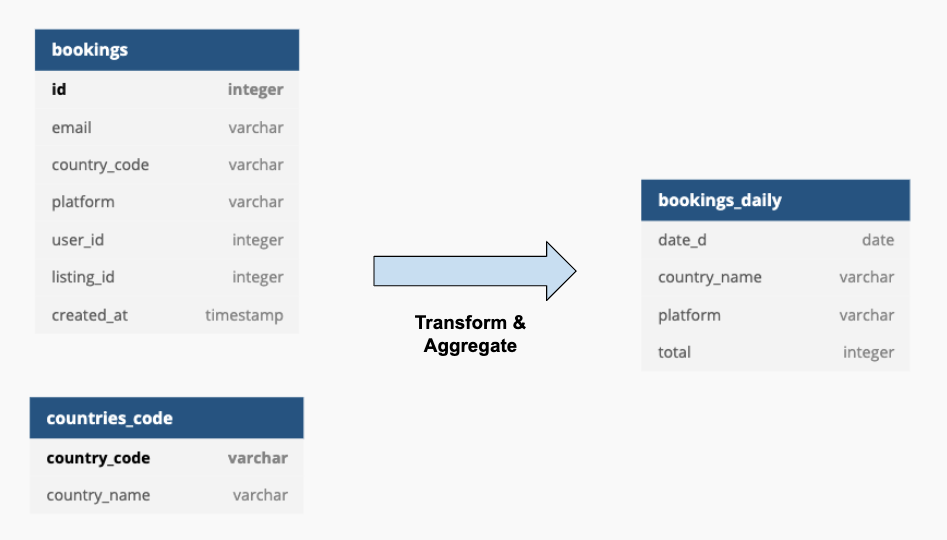 So to implement this, the code for the transform job will be:

To deploy the above SQL code to production, we set up a daily cron job that runs the SQL file. This is the most basic method possible, and the contents of our cron job will look like so:

In the above example, the main transform logic is only within the SELECT statement at the end of the code block. The rest is considered metadata and operational boilerplate.

Besides using an SQL table to store the transform results, we may also opt to create a database view (which means we store the definition only), or we can create a materialized view for it.

In practice, using dedicated transformation tools (like Holistics, dbt, dataform and so on) will handle the SQL boilerplate and let you focus on just the core transformation logic.

For example, the below screenshots show how this is done using Holistics: 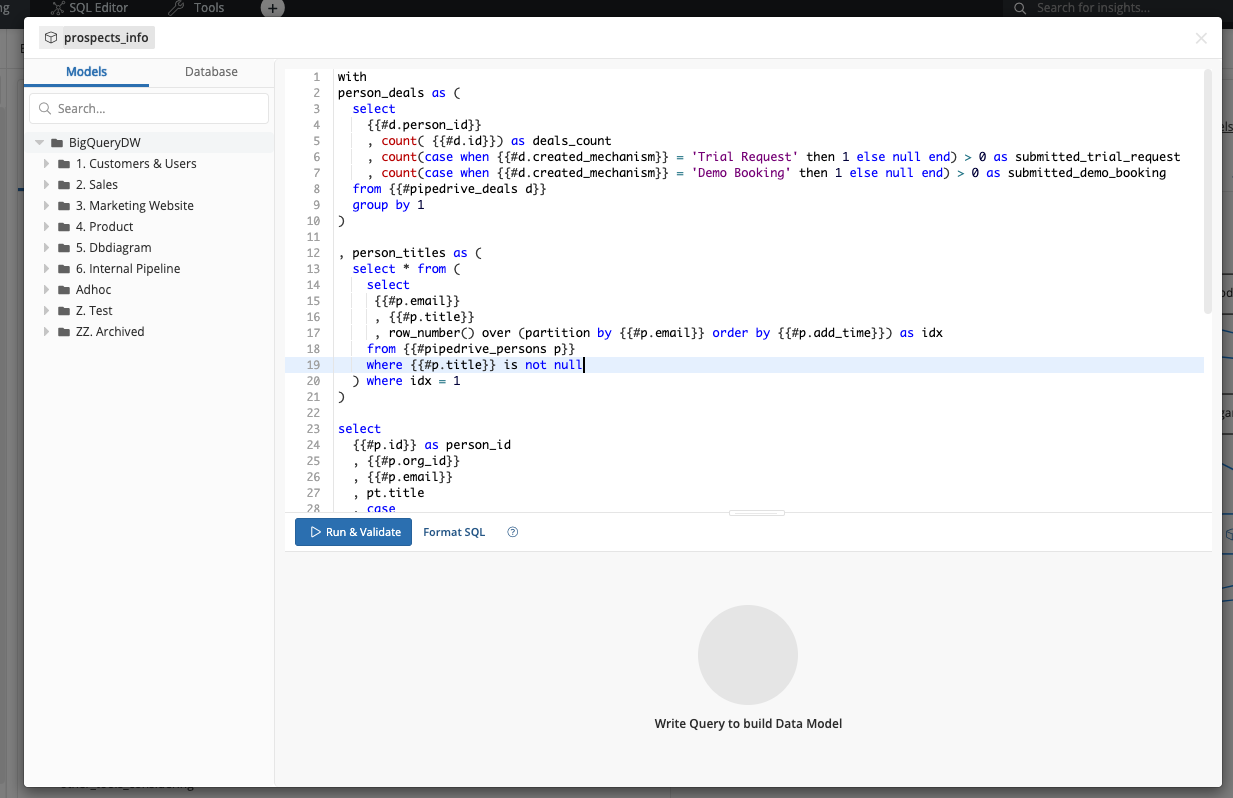 The transformation workflow (or the DAG)

The above section talks about a single transform step. But when you have multiple transforms that depend on each other, you will run into a problem of “dependency management”.

This concept is called a DAG (directed acyclic graph) workflow. It is best explained by the diagram below.

In the above diagram:

In practice, most data transformation tools will have support for DAG workflows. This is especially true for classical ETL tools, in the older paradigm. Regardless of which paradigm you’re in, your job will be to focus on managing each transform’s logic and their dependencies.

To continue the earlier example using Holistics, once you define a transform job using SQL, Holistics will automatically read the transformation query and then calculate a dependency workflow for it. 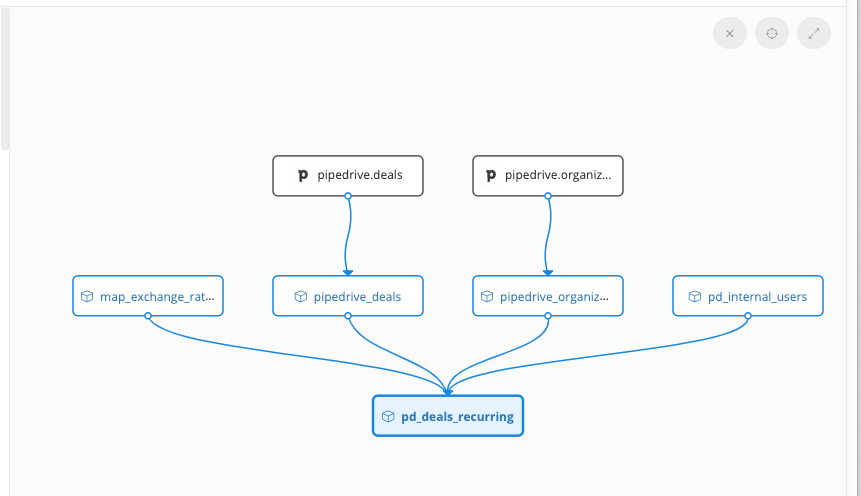 The examples we have been discussing so far is done in the context of the ELT model, which means the transformation happens directly inside the data warehouse.

We shall talk a little about the drawbacks of the more classical approach now. As we’ve mentioned before, data transformation used to take place in a programming or scripting language, before the data is loaded into the data warehouse. Below is an example of a transform step done using Ruby programming language.

The main drawback of this approach is that the majority of the load is now on the single computer that runs the script (which has to process millions of data records).

This worked well when data warehouses were slow and expensive. It also worked well at a time when data volumes were comparatively low. Given these restrictions, data professionals would look for ways to offload all processing outside of the data warehouse, so that they may only store cleaned, modeled data in the warehouse to cut down on costs.

You may read more about this in the 2.1 Consolidating data from source systems section of our book.

In our section on “data loading” earlier, we spoke about Incremental Load, where only the differences in data are loaded from source to destination. A similar concept exists with data transformation.

Let’s revisit the earlier example of bookings → bookings_daily. This time, let’s look at how to run this transformation incrementally. 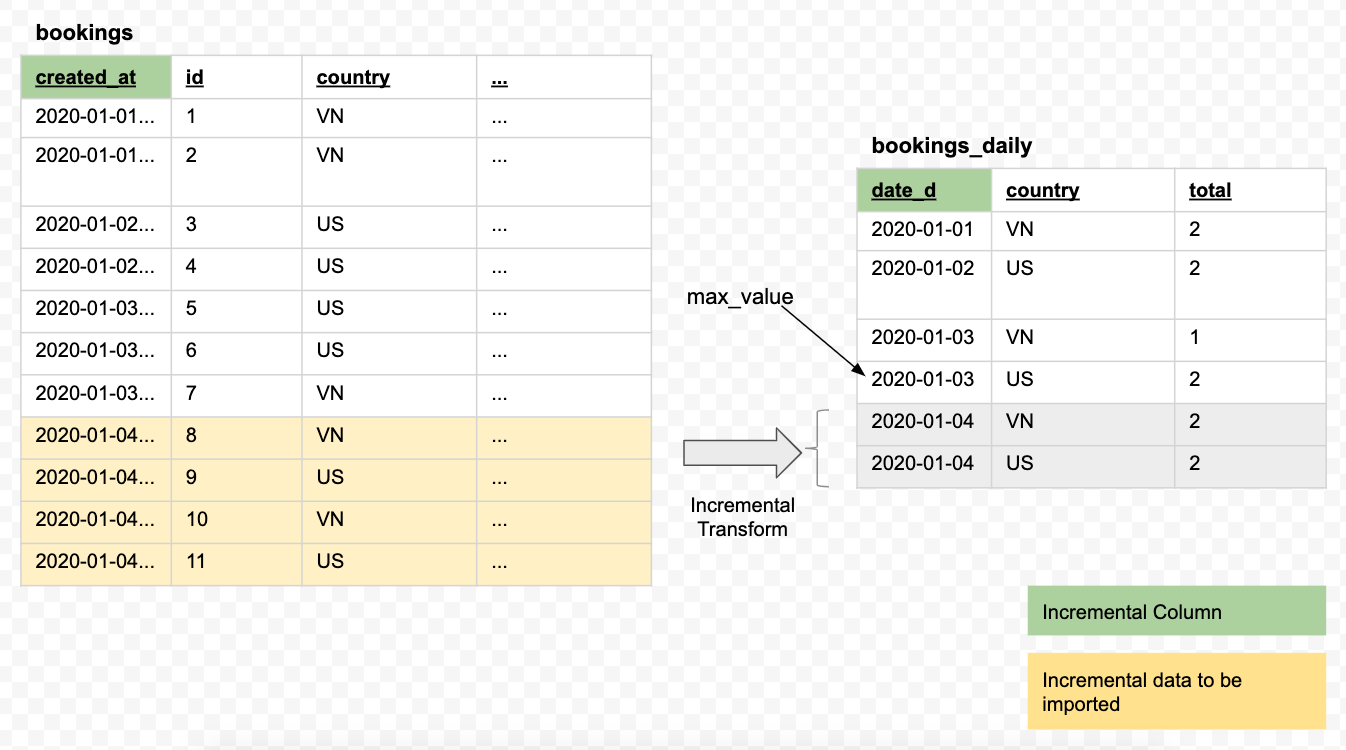 In the above diagram, you can see that when the transform job runs, only data for 2020-01-04 will be processed, and only two new records will be appended to the bookings_daily table.

How much cost does this save us? Quite a bit, as it turns out.

Imagine that your bookings have 100M records and are growing at a pace of 10,000 records a day:

In practice, an incremental transform in SQL should look something like this:

The [[ ts::date > {{max_value}} ]] is added so that the tool will pull the latest value of the incremental column from the destination table and substitute it within the SQL query. With this, only newer data are materialized into a destination table.

When can you not run incremental transform?

If you look at the above example, it is clear that sometimes you cannot run incremental transform: