In the previous sections we have mentioned two terms repeatedly: ETL, and ELT. In this section, we will dive into details of these two processes, examine their histories, and explain why it is important to understand the implications of adopting one versus the other.

Do note that some of this will make more sense after you read Transforming Data in the ELT paradigm.

In any organization’s analytics workflow, the most intensive step usually lies in the data preparation step: that is, combining, cleaning, and creating data sets that are ready for business consumption and decision making.

This function is commonly known as ETL (Extract, Transform, and Load), which identifies the three distinct stages involved. 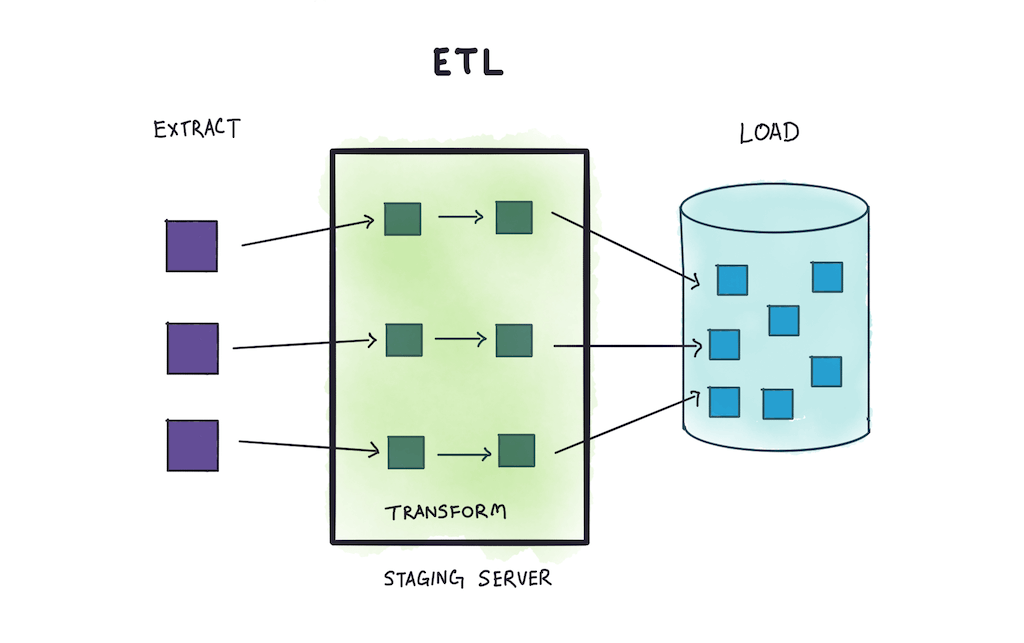 In this process, an ETL tool extracts the data from different data source systems, transforms the data by applying calculations, concatenations, and the like, and finally loads the data into the data warehouse.

What happens in this approach:

The key things to note here is that raw data is transformed outside of the data warehouse, usually with the help of a dedicated “staging server”; and that only transformed data is loaded into the warehouse.

What happens in this approach:

The shift from ETL to ELT

Historically, building a data warehouse was a very expensive undertaking, both on the hardware side and on the software side. The server costs, implementation costs and software licenses for a data warehousing project 20 to 30 years ago could easily go up to the millions of dollars and take months to implement.

In this context, the ETL model made perfect sense: raw data was properly transformed in a staging server (or ETL pipelining tool) before being loaded into your ridiculously expensive data warehouse. The volume of data that was handled by such tools back then was relatively small, and thus manageable for most staging servers to handle.

But the ETL approach has a number of drawbacks when viewed through a more contemporary lens:

So what changed? Well, a couple of things emerged in the 2010s that made an alternative approach possible:

And so at some point, people began to realize: the cost of storing and processing data had become so cheap, it was now a better idea to just dump all your data into a central location, before applying any transformations.

And thus lay the seed that grew into the ELT approach.

In contrast to ETL, an ELT approach has a number of advantages:

As stated in 1.4 Our biases of a good analytics stack , we favor ELT over ETL, and we believe that all modern analytics stacks should be set up this way.

Below is a short table to summarize the differences between ETL and ELT.

What About Data Lakes?

At this point, it’s worth asking: what about data lakes? How does that fit into the ELT vs ETL paradigm that’s we’ve just discussed?

Let’s back up a moment.

A data lake is a fancy term for a central staging area for raw data. The idea is to have everything in your organization dumped into a central lake, before loading it into your data warehouse. Unlike data warehouses (which we have talked about extensively in our discussion about ELT, above) lakes are often object buckets in which you may upload all manner of unstructured data: examples of buckets are services like AWS S3 or Google Cloud Storage; examples of unstructured data are CSV dumps or even text files, exported from various source systems.

It is important to understand that a data lake is not a new idea. Since the 80s, business intelligence projects have usually included a staging area for data. ETL systems would then take data from that staging area and transform it within the tool, before loading it into data warehouses. The only thing that is new here is the term itself — and that term harkens back to a 2010 blog post by Pentaho CTO James Dixon.

We have no strong feelings about data lakes. The point of ELT is to load the unstructured data into your data warehouse first, and then transform within, rather than transforming data in-flight through a pipelining tool. Whether this raw data sits in an object bucket before loading is of little concern to us.

To conclude, when you are picking analytics tools, ask yourself: does this tool assume an ETL approach, or does it assume an ELT approach? Anything that requires a data transformation step outside the data warehouse should set off alarm bells in your head; it means that it was built for the past, not the future.

Pick ELT. As we will soon see in Chapter 3, ELT unlocks a lot more than just the operational advantages we’ve talked about above.

Transforming Data in the ELT paradigm