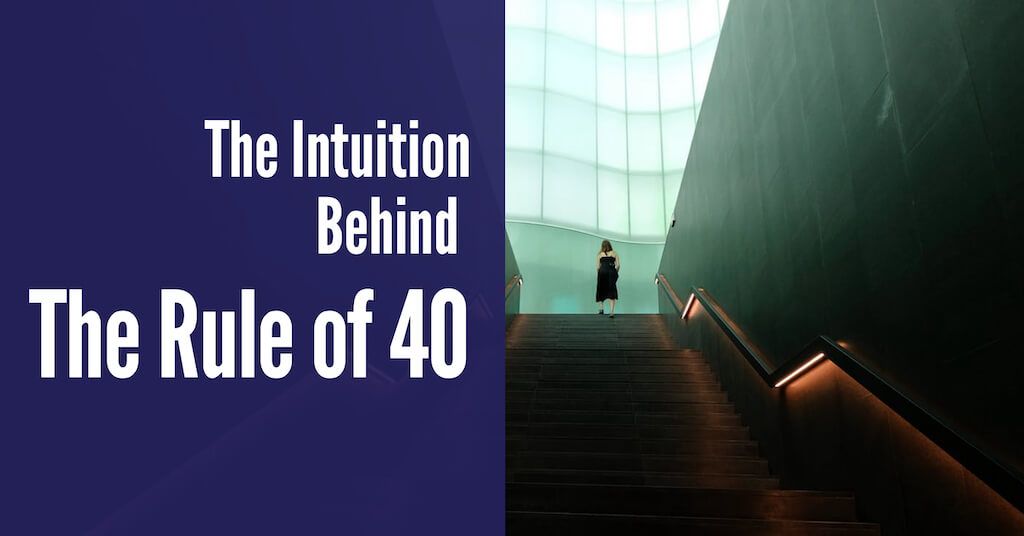 The Rule of 40 (originally stated as ‘the rule of 40%’) was originally popularized by two blog posts from venture capitalists Brad Feld and Fred Wilson back in 2015. Both of them were at the same board meeting, when a late-stage investor articulated the rule to them for the first time.

The rule itself is simple to state:

If you are a venture-backed SaaS company, your annual revenue growth rate + your operating profit should equal 40%

There are a few unsaid assumptions in the Rule of 40:

Why does the Rule of 40 exist?

The rule exists as a result of two inescapable facts:

The second idea is simpler to understand, so we’ll start there. Venture capitalists are expected to return 3x their fund at the end of a 10-15 year period. The reasons for this are pretty arcane, but the consequences for a venture-funded startup are very predictable. To cite Andy Rachleff, formerly of Benchmark Capital:

According to research by William Sahlman at Harvard Business School, 80% of a typical venture capital fund’s returns are generated by 20% of its investments. The 20% needs to have some very big wins if it’s going to more than cover the large percentage of investments that either go out of business or are sold for a small amount. The only way to have a chance at those big wins is to have a very high hurdle for each prospective investment. Traditionally, the industry rule of thumb has been to look for deals that have the chance to return 10x your money in five years. That works out to an IRR of 58%. Please see the table below to see how returns are affected by time and multiple.

(Yes, you probably noticed that the lower bound of percentages in this table seem suspiciously close to 40%. But that’s probably just a coincidence — the Rule of 40 isn’t about growth rates so much as it is about the balance between growth and profitability.)

The upshot of this table is simply that venture capitalists expect you to grow big fast. Which brings us to our second point:

SaaS companies burn through a lot of cash on the way up.

Why is this the case? David Skok lays out the reasons in a seminal blog post titled The SaaS Cash Flow Trough. The intuition here is simple to understand: the beauty of the SaaS business model is that customers pay smaller, but predictable amounts over a long period of time. When you want to acquire a customer, a SaaS business often has to pay some costs up front (this is the famous ‘customer acquisition costs’, or CAC). The combination of CAC and smaller recurring revenues means that every customer that a SaaS acquires results in a loss for the company until some payback point in the future.

Let's illustrate this with an example. Say that Acme SaaS Corp has a product that charges $100 a month. And let’s say that it pays $1500 to acquire a new customer (this is usually the cost of paying the sales person and running the ad campaign and so on). This means that a customer of Acme SaaS will only breakeven on the 15th month! ($100 a month for 15 months = $1500). Of course, for every month after that, each additional dollar it receives from the customer is pure profit.

This is very different from, say, a shoe manufacturer. With a shoe manufacturer, you pay some costs up front to tool out a factory, and hire workers, and buy materials to make shoes. But every shoe is sold at a price above the cost of goods — meaning that you generate a profit from each and every pair you sell. As you grow, you make more money, and you can pay off the loans you took to build out your factory.

With a SaaS company, the more you grow, the more losses you’d rack up! Let’s say you have $1 million dollars in the bank. You spend that $1m to acquire 666 customers. Now you’ll have no profits until the 15th month — when every one of those 666 customers hit their payback periods and begin generating profits for you.

This is why Skok calls the experience of growing a SaaS company ‘going through the SaaS Cash Flow Trough’. It’s horrible. And therein lies the basis for the ‘Rule of 40’.

What Feld and Wilson were responding to when they said they found the Rule of 40% to be ‘fantastic’ was that they were looking for a simple heuristic to balance between growth and profitability. If you grow a SaaS company too fast, you’ll rapidly run out of cash — meaning that you’ll need to raise more capital from investors. But if you run your SaaS company for profitability, you’ll grow far too slowly, meaning that other competitors may colonise the market before you do.

You’ll want to find a sweet spot between growth and profitability — and the Rule of 40 gives you a guiding heuristic to do so. Use it well.

A startup's first job is to create a customer. We take a closer look at how that affects the metrics you measure at the product stage of a startup's lifecycle.