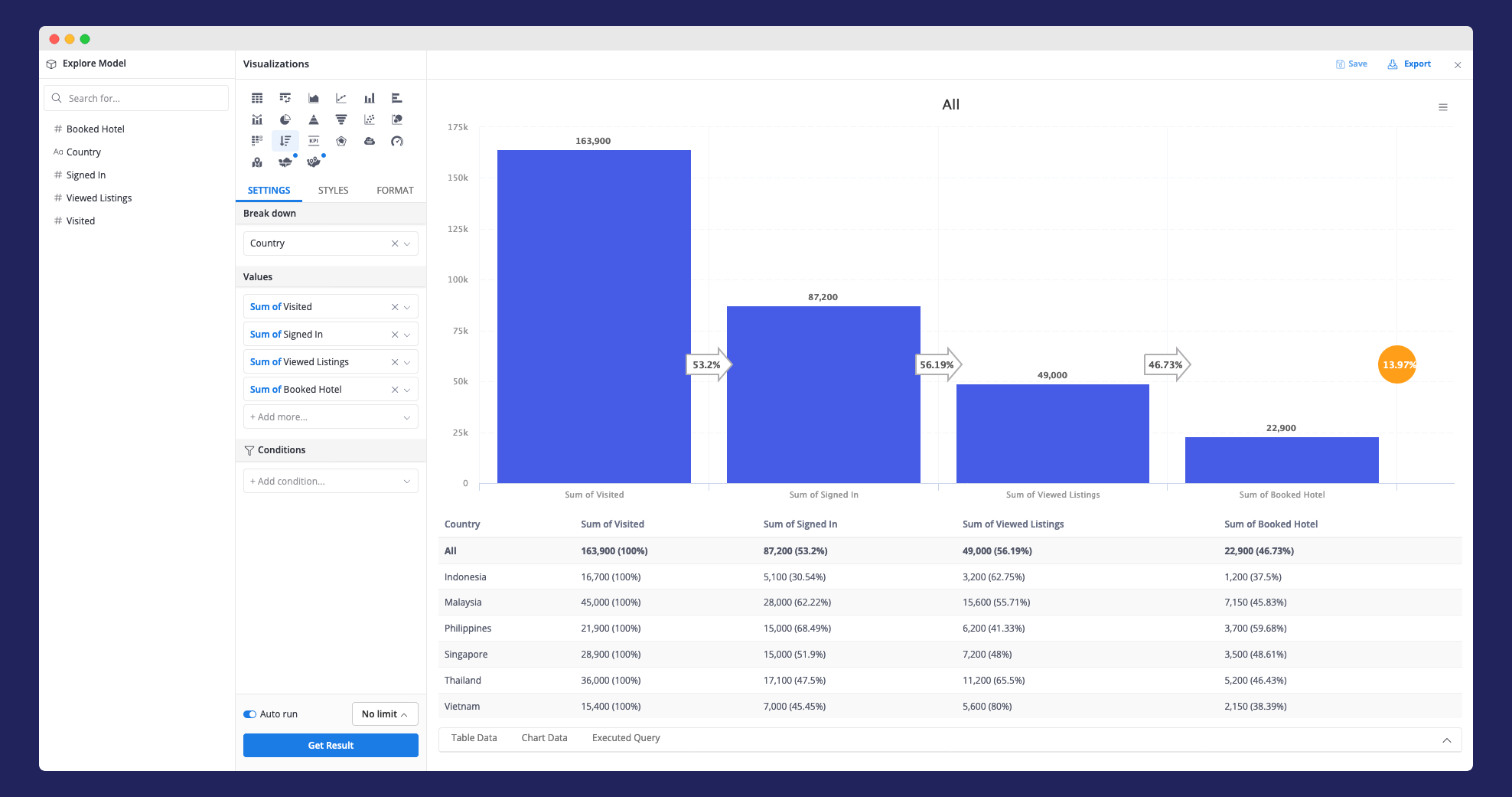 Conversion Funnel has been with Holistics since the first day, but it never got the attention that matches its importance. That's why we have taken a hard look at this viz type and decided to have a big update for it.

The following changes will come into effect from December 7th

1. Change of sections in Viz Settings

Y-axis section is renamed as Values

The Legend and X-axis section are replaced by Breakdown

The Breakdown section will help you break your funnel down with one dimension.

From our experience, X-axis and Legend fields have caused a fair amount of confusion among our users. Conceptually, a Funnel chart has no X-axis, and we also think Legend is not a suitable name to be used here.

Therefore, we decided to remove both the Legend and X-axis sections, and introduce Breakdown section to make streamline the user experience.

2. You can now manually order columns in your funnel

Previously the columns are automatically sorted from the highest to the lowest. This normally makes sense assuming that the value of a later step should be lower than that of a previous step. However, this behavior makes it hard to notice if your data has any issue that makes a later step has a higher value.

Now, you're able to change the columns' order by re-arranging the Values' fields.

Does this affect my current Conversion Funnel?

All the conversion funnels created before December 7th will be kept the same, so no worries!

If you explore or edit a conversion funnel created before December 7th, you will see a small message in viz settings that says you're running an old version of Conversion Funnel and direct you to this blog. You can still "Save As" or "Save" the old report should you want to.

How to use the new Conversion Funnel with my current data structure?

However, if you want to migrate your data to the new conversion funnel, you might want to consider the following cases.

Case 1: you have one field in X-axis, and multiple values in Y-axis

→ Drag Country Name to Breakdown, and the values Visited, Signed In, Viewed Listings, and Booked Hotel to Values. Drag Name to Conditions

→ Drag Country Name to Breakdown. Then we can create 4 Custom Measures (a combination of Steps and Count of Users) as the following:

(1) Count the number of new users who visited the website

(3) Count the number of (2) who viewed listings

Then drag those measures into Values section in the new conversion funnel.

If you have trouble with the new conversion funnel, let us know at [email protected]!

Another festive season is coming! If you haven’t got any plan for the upcoming holidays, here’s our little suggestion: Explore Holistics’ newest features and improvements.

The Holistics Blog
—
Introducing an improved Conversion Funnel
Share this