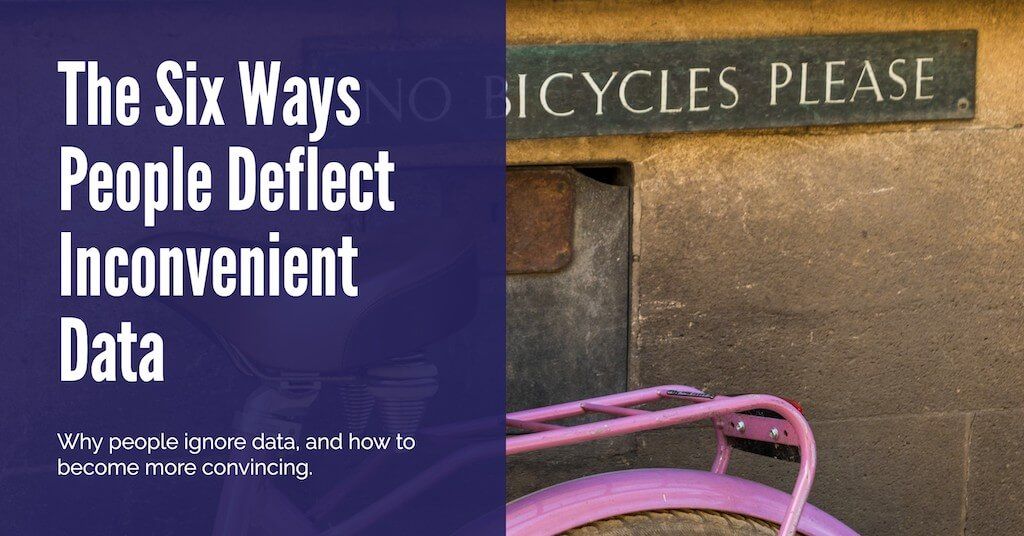 Let’s say that you’ve presented a business leader with some data, and they set it aside. You ask why.

“Oh it’s obviously wrong,” they say, brow furrowed. “It’s the result of an unreliable data source. Remember that incident from back when —“

“That’s two years ago.” you point out. “We spent a whole day fixing it, and we now have a process to make sure that doesn’t happen again.”

“Oh, it has, hasn’t it?” the manager says, wrinkling their nose. “Well, I don’t trust it.” You shrug and leave; the report isn’t particularly important to your job. Later you learn, from Mary in marketing, that the manager didn’t trust the data because it violated a hypothesis he had about a particular marketing campaign that he wanted; he went ahead with it anyway.

A few weeks later you sit in on a planning meeting and notice the manager triumphantly talking up the results of some other campaign. You lean over and grab a copy of one of the printouts, and you realise that it’s from the same dataset you’d presented from — exported from the exact same systems that produced the first report. Only this time the data confirms what the manager wants to believe, and he's conveniently forgotten about the ‘data reliability issues’ … because he wants to crow about it.

The more interesting question to ask, though, is “how do people reject inconvenient data?” and “when do they accept data?”

The answers to this question are frankly more interesting than they deserve to be. And they come from a 1993 paper by Clark Chinn and William Brewer of the University of Illinois at Urbana-Champaign.

Chinn and Brewer’s paper is titled The Role of Anomalous Data in Knowledge Acquisition, and it studied the way science students reject anomalous data when learning scientific theories.

However, the results Chinn and Brewer found apply to more than just science students — as part of their argument, the researchers presented examples from the history of science to show that these responses are fundamentally human, and that the way science students react to anomalous data are pretty much the same ways that scientists have reacted to new developments throughout history.

Presumably, these are the same ways that non-scientist adults react to anomalous data today.

Chinn and Brewer also claim one more thing that is useful to us — they claim that the list of possible deflections that they present are exhaustive. I mostly take this assertion to be true. In the two decades since they first published their paper, no other researcher that I know of has come up with additions. (To be fair, I’ve only done a cursory search — but I’ve read multiple papers downstream of this one and they all sort of take it as a fixed set). This means that it’s probably really just six ways that people deflect anomalous data, and that’s good to know.

These are the seven possible responses to anomalous data:

Chinn and Brewer point out that these seven responses may be reduced to a mere three questions:

And then they go on to say that the three questions aren’t presented in a particular order — they may be answered in parallel for all we know. The point is simply that anyone who generates one of the seven responses must also generate an answer to all three questions.

For what it’s worth, I find the three questions easier to remember.

What, then, makes a person more willing to change their mind when presented with anomalous data? I mean, apart from motivated reasoning, like our manager in the opening of this piece, people can and do reject anomalous data for all sorts of valid reasons.

Chinn and Brewer give us four factors to think about:

At the very end of the paper, Chinn and Brewer say that these factors are useful to science educators because you may invert them when teaching new scientific theories to kids.

I think this applies to data folk as well — the next time you’re facing someone who is reluctant to embrace what the data tells them, break down why they believe what they believe by looking at the three questions above, and then work through the checklist of four factors in order to figure out what else you need to give them to believe you.

Of course, this is an ideal situation, where hopefully you're faced with a reasonable manager — someone who wants to get to the bottom of things. If you're up against a business leader who's determined to stick to motivated reasoning — then, well, good luck.

A hack for when you don't understand data jargon.

How a data person might fit into your company's learning cadence, and what that means for company performance.