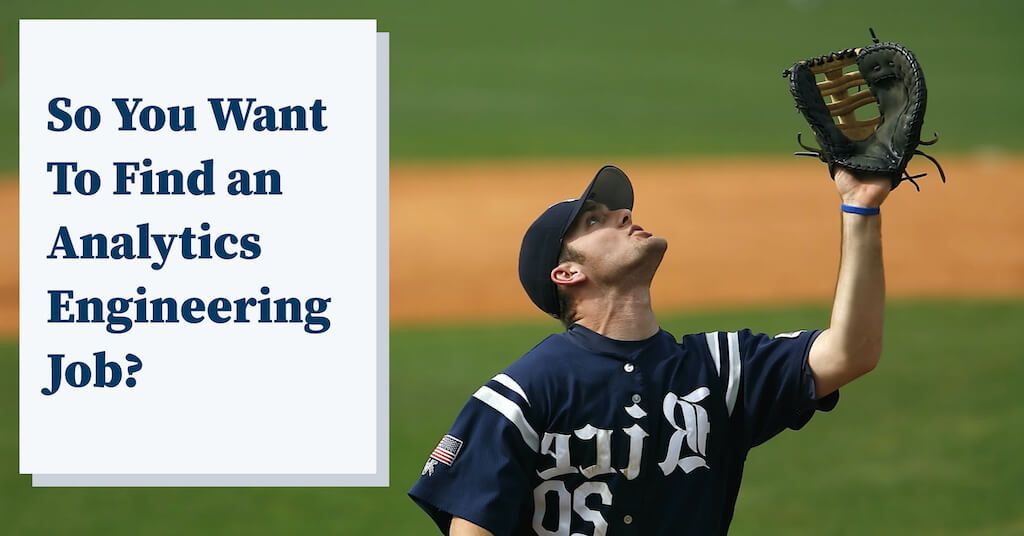 Shortly before writing last week’s blog post What We Know and Don't Know About Analytics Engineering, I did a quick search for ‘analytics engineer’ on the job portal Indeed.com, scoped to the Asia Pacific region.

To be up-front, I did find one listing, but it was for a data engineering role — that is, the type of job where you’re expected to set up and maintain ETL pipelines and manage databases. It just so happened to say ‘data analytics engineer’ in the job title.

Of course, Indeed.com didn’t leave me with a blank screen — it populated my search results with any listing with the word ‘analytics’ and ‘engineer’ in it. The majority of those jobs were more traditional data analyst roles. These job listings included descriptions like:

I repeated my search across a couple of other locales. New York and California returned a good selection of Analytics Engineering roles, exactly the type of listings that you want if you’re looking to get into analytics engineering as a discipline; to my surprise, when I repeated my search for Indeed’s Berlin site, I found a handful of roles with both the right name and the right description.

What do I mean by this? Well, take, for instance, ‘Analytics Engineer - Data Platform’ from Trade Republic Bank GmbH. This is a listing with the right name, but with a description that doesn’t seem quite right for an ‘analytics engineer’. In fact, I’d say the odds are good that this is a traditional data analyst job in disguise.

But unlike my Asia Pacific search, Berlin did have a number of properly named analytics engineering roles. This listing from On AG for instance (yes, the shoe company) seems like a particularly good candidate: the job description states that it wants people with ‘experience with modern data stack tools (we use BigQuery, dbt and Looker)’ — which increases the odds a fair bit.

Search for Stacks, Not Titles

So what does this tell us? It tells us how much ‘analytics engineering’ as an idea has spread. Right now, it doesn’t seem to have spread very far, and job seekers who aren’t in global tech centers and who want to get into this nascent field would do better to look for other indicators.

Out of curiosity, I ran a search for ‘dbt’ for the APAC region, as part of the research for this post. The results of that was slightly better: I found two jobs in South East Asia, and both seemed like exactly the sort of role that Michael Kaminsky, Claire Carroll and Paul Glenn would call analytics engineering:

(But what does ‘data scientist’ actually mean? Well, perhaps we just don’t know.)

And so it’s understandable that ‘analytics engineer’ — as a job title — isn’t as common in the rest of the world. When we published our post on analytics engineering last week, a number of readers reached out to us and said one of two things: either that they didn’t know that such a role existed, or they reacted by questioning the definitions that we laid out.

What’s the actionable takeaway here? The takeway is this: if you’re a data analyst and you want to get into analytics engineering, searching for specific tools on job sites seem like a better way to find relevant jobs right now. Look for companies that use columnar data warehouses like BigQuery or Redshift, along with a data modeling tool like dbt or Dataform, coupled with something like Looker or Mode or Holistics (ahem) or Redash or Superset, with connectors from Stitch Data or Fivetran. Companies that use modern tools are more likely to hire you for analytics engineering-type work. Adjust your search accordingly.

Of course, this suggests a corollary: if you want to track the adoption of analytics engineering in your particular job market, set up an email notification for jobs with the word ‘dbt’ or ‘Fivetran’ in the listing description.

That should be a pretty good proxy for adoption, I think. And it might be a useful leading indicator in your career.

The data lakehouse is a thing, Superset is also a thing, and how to make dashboards using a product thinking approach.

Everything we know and don't yet know about the emerging role of analytics engineering.

The Holistics Blog
—
So You Want To Find an Analytics Engineering Job?
Share this