Looker (acquired by Google) is a powerful business intelligence and analytics software that enables self service analytics. However, Looker’s target market are enterprise customers, their entry price - wwhich is around $35K/year - may not be affordable for some companies. Holistics provides an affordable alternative to Looker for SMBs and the midmarket for self-service analytics.

For more details about Looker pricing review, scroll down to the end of this article.

When we bring tables/views from Holistics and Looker both follow a very similar pattern but a different experience from the terminology and user standpoint. Let’s compare this terminology side by side to understand them better.

In Looker, we bring the metadata of our tables/views from our data warehouse with the import table option which autogenerates the basic lookML and creates the dimensions and measures for you to build on top of the view. 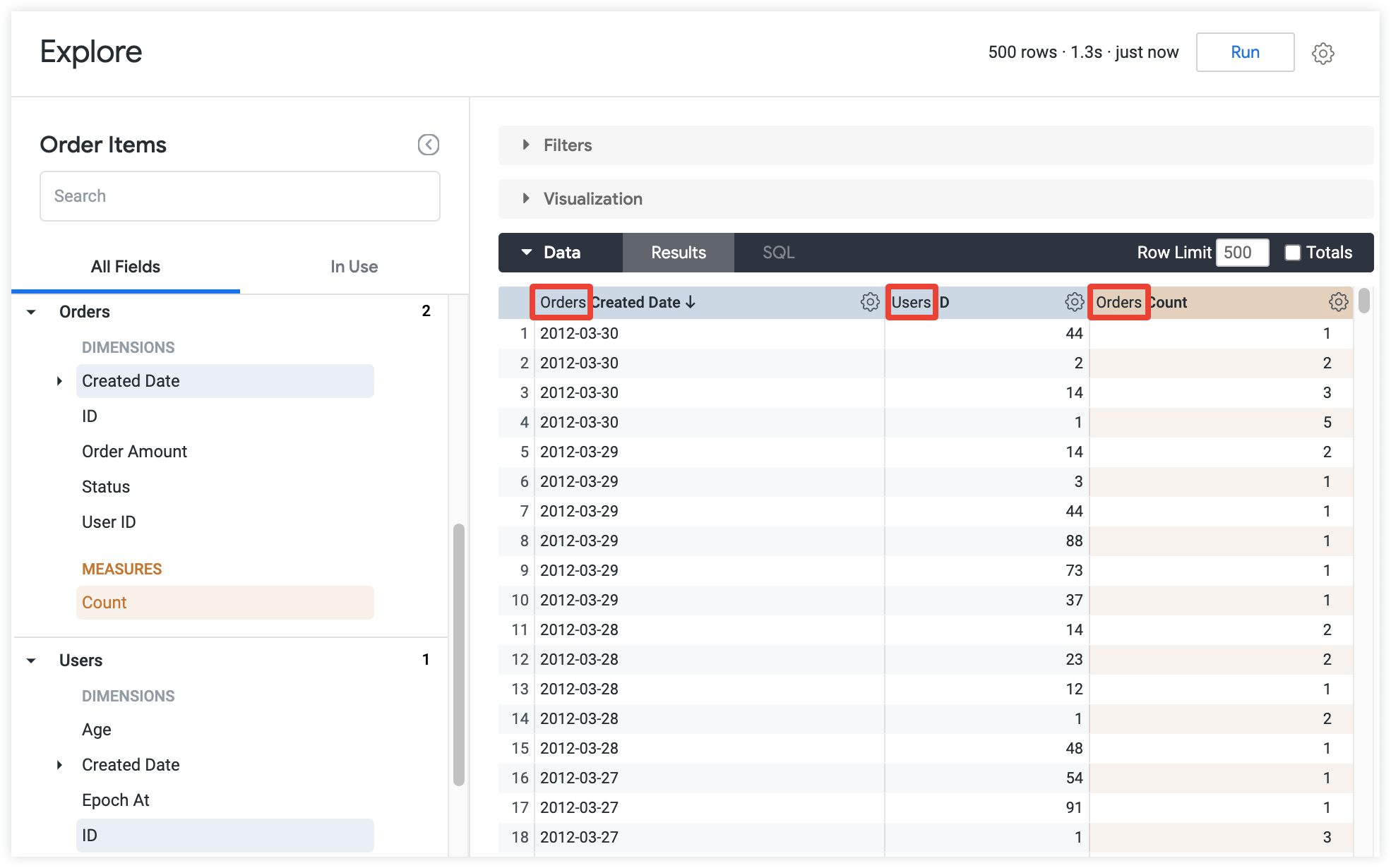 In Holistics, the metadata is imported using a similar import data table method where all the whole schema or selected tables can be imported automatically, and base dimensions are created by default.

When it comes to data exploration Looker and Holistics have a similar concept but a different experience for the data consumers. Looker uses a concept called Explore to provide all the subject-specific data fields for their users to explore data and create relevant visualizations.

On other hand, Holistics uses the dataset concept to curate a subject-specific dataset for the data consumers to explore and create visualizations.

In both instances, SQL is generated auto-generated and non-technical users can still create reports and dashboards without much assistance from the technical team. This user experience is even better served to non-technical users as it mimics a very similar drag-drop interface like other BI tools such as Tableau etc.

There are times when Looker or Holistics can’t support complex use cases in their modeling language and it needs to support a custom derived SQL to structure the data in a format that is friendly for visualizing. This is possible in Looker using its sql derived table syntax in LookML, whereas this is easily achieved in Holistics using its Transform Model feature. 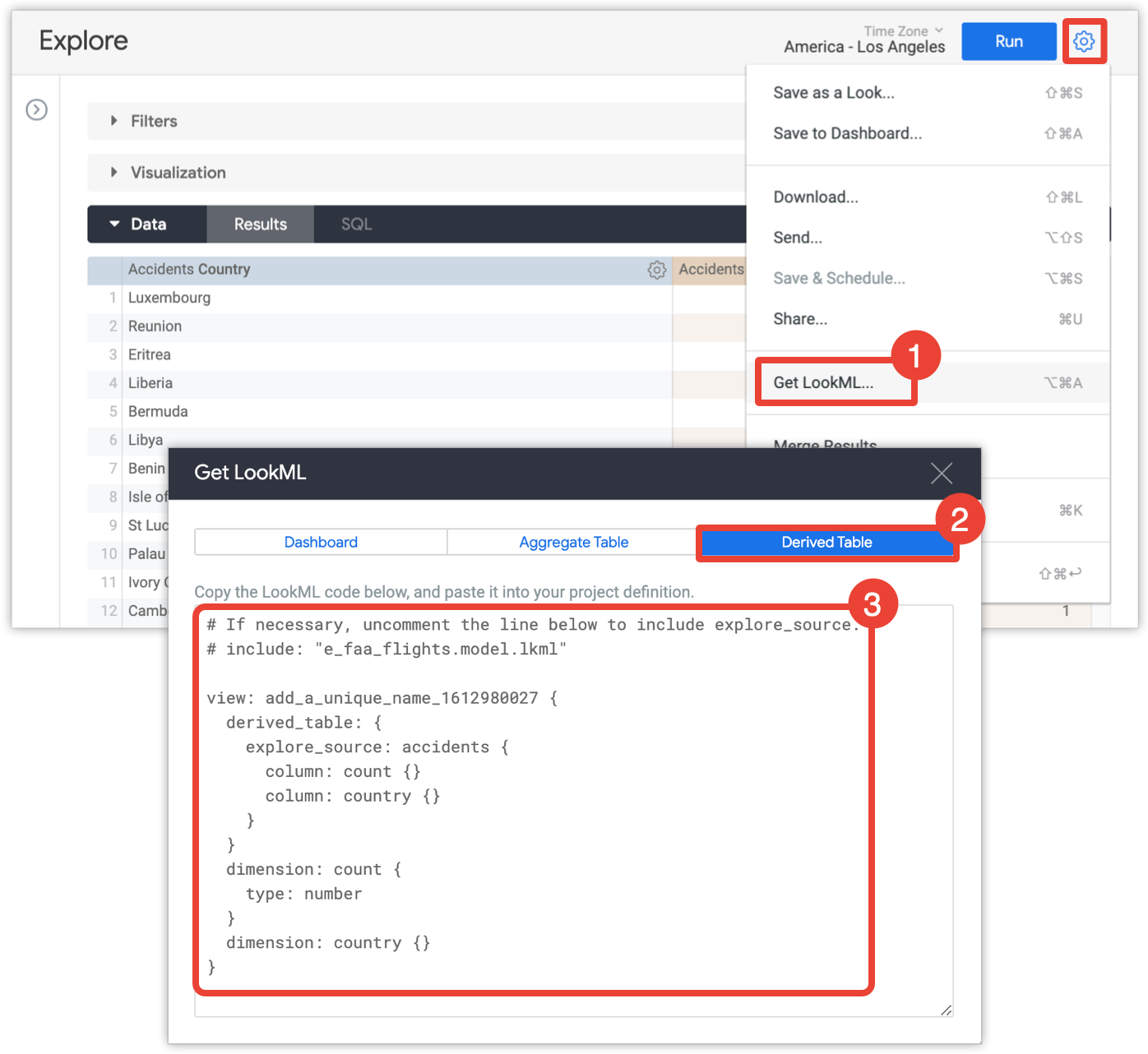 This makes it easier for any Analytics/SQL Developer to solve complex use-cases using their native Data Warehouse SQL syntax.

With both Looker and Holistics offering the propriety language you can perform data transformations with tons of flexibility. Let’s take a look at LookML and AML code samples here. 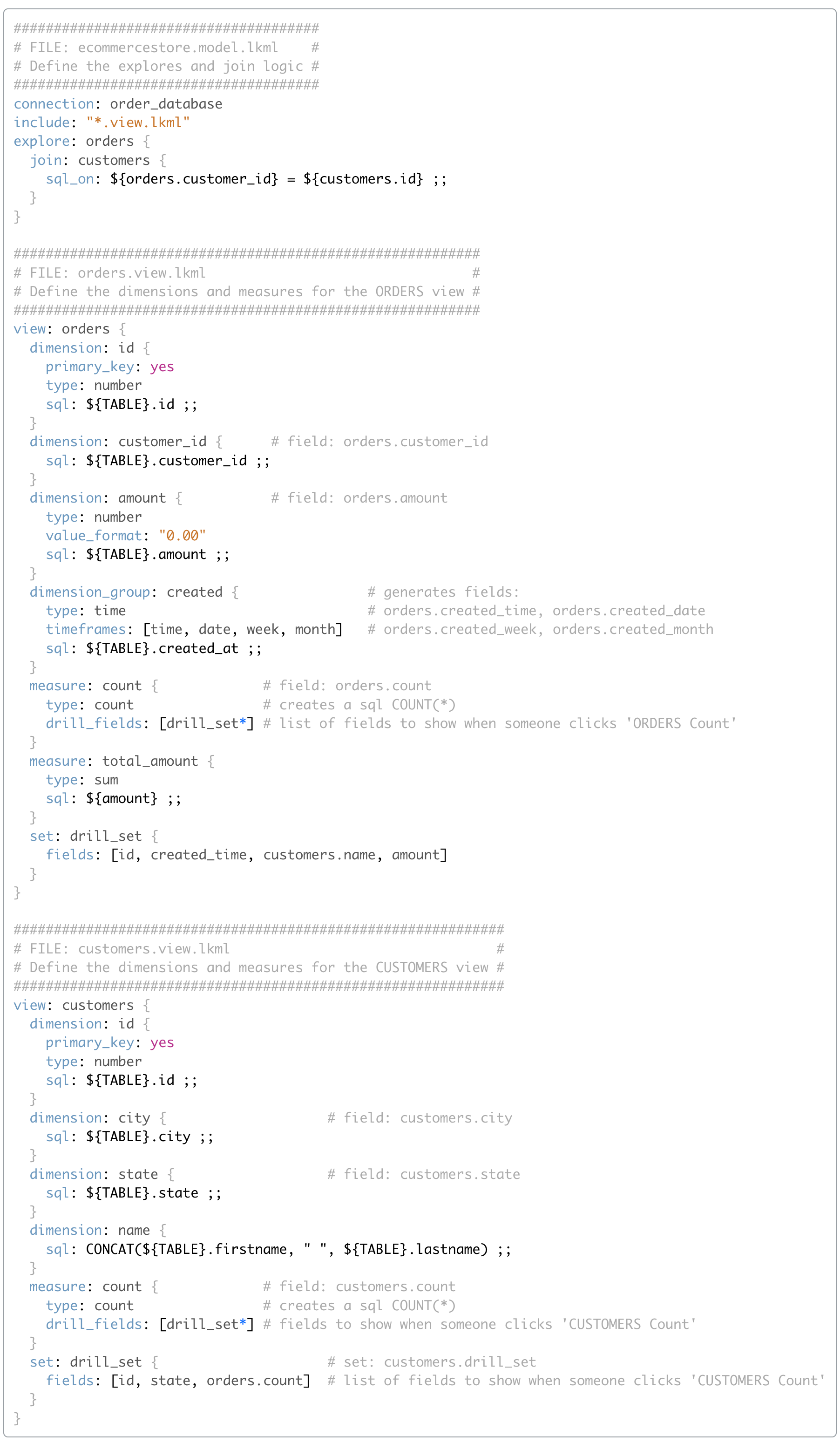 Holistics AML tries to optimize for a better developer experience through auto-complete and instant feedback of errors. Their developer-first approach makes AML much easier to pick up and start developing than LookML. This similarity of the languages between the tool makes it easier for the developer to switch and adopt.

When it comes to the dashboard visualization layer both tools offer varied chart options like a bar, line, heatmap, etc. However, Holistics provides better-looking charts and even more visualization types by default than Looker. For instance, if you want to keep all your metrics in one sheet and visualize it with sparklines, it can be visualized using their metric sheet widget type easily.

“We had previous experience with Looker, but we were looking for a more modern and faster tool..”
Olaf Vogel, Senior Intelligence Analyst at Feeld - a Holistics customer

A requirement that immediately sets Looker apart from other alternatives is the need to invest time in an upfront data modeling step before any data visualizations can be done. For Looker, this means learning and preparing the modeling work in LookML first, as an abstraction on top of a SQL database.

Learning LookML is not rocket science but still takes significant effort, thus creating a fairly high barrier of entry. As a result, only analysts who are willing to invest in Looker’s approach would go through the process of learning it. Furthermore, Looker’s domain-specific language approach has a fairly long feedback cycle as analysts need to write the code, validate, save and only then can test it through exploring the resulting models. If there is an issue with the generated code, the analysts need to go back into fixing the code and repeat the cycle.

Holistics’ data modeling process, on the other hand, does not require the need to learn a new language.

The only requirement is some minimal SQL knowledge to model some advanced use cases such as custom fields. Analysts can jump right into the data modeling process and get the models out with minimal learning. Furthermore, the feedback cycle is small as the data modeling interface has integrated visualization output, making it apparent when there is some fault in the models. As the underlying models are also stored as a domain-specific language, Holistics also retains the advantages of this approach and allows more advanced users to have freedom over the modeling process.

Take a look at various community posts on Slack, Reddit, Quora, here’s what we know:

On AWS Marketplace, you can also find the “retail” pricing for Looker:

What About Holistics Pricing?

As an alternative to Looker, Holistics provides 80% of Looker capacity at 1/5 of Looker price point. It provides a fully self-service trial process - making it easier to try out.

Not sure? See how this ex-Looker customer thrived with Holistics.

The above apple to apple comparison makes it clear that both these tools offer a mixture of ways to transform, model, and visualize data. Looker still leads the Self Service space but when it comes to choosing a tool when a company is still in its early days of adopting a data-first culture, you are not just bound to choose from a single option. If you are a startup or a Fortune 500 company and want to adopt a self-service data-first culture, do checkout Holistics.

Another pro of choosing Holistics is its pricing structure which is way more affordable than Looker and is definitely a plus when you are a startup and implementing BI tool for the first time or trying to adopt the self-service data culture.

Because Data Team Is Not IT Help Desk

Get A 14-Day Free Trial Talk To Us