MongoDB Reporting And Analytics Made Easy

Our MongoDB reporting and extract, transform and load (ETL) feature in Holistics uses a simple three-step process that allows you to build automated SQL reports with your MongoDB data. Now you can easily create visualizations and write joins using SQL for your MongoDB data, together with essential data from other sources and databases.

What Should You Use This For?

Visualize Charts And Reports With MongoDB Data: Easily build tables with your MongoDB data inside your reporting database, to run automated SQL queries for visualizations and reports.

Write SQL Joins For Your MongoDB Data: Write joins using SQL for your MongoDB data, together with data from other sources and databases.

Merge MongoDB Data With Other Data Sources: Setup a Holistics Data Import job with just a few clicks, to move and combine your MongoDB data with data from other sources, all inside your reporting database.

Connect Holistics to MongoDB: Provide your required MongoDB database details and validate your Holistics connection. You are now ready to move your MongoDB data into your connected SQL reporting database. Configure and schedule A Data Import Job: Automate the ETL of your MongoDB data using the Holistics Data Imports feature, which will move data from MongoDB into your connected SQL reporting database, as a data table in the destination. During the import configurations, you can use MongoDB dot notation to pull out specific values you want, such as from a column that has data stored as JSON, for example.

Visualize MongoDB data with SQL queries: Run joins for your new MongoDB data table together with other data tables, to build your automated data objects such as reports/charts/metrics, as required. 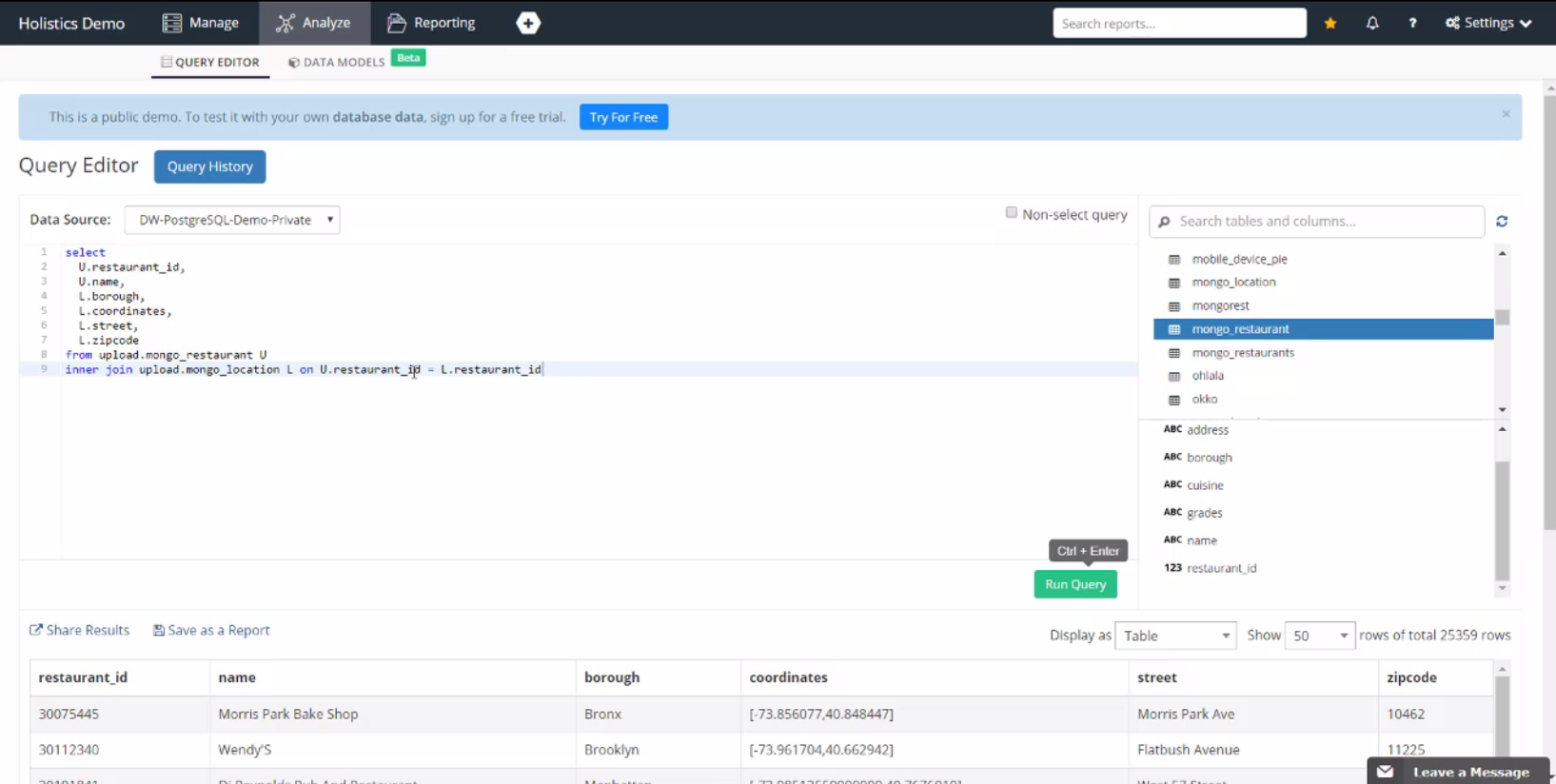 Easily query and automate reporting for your MongoDB data with Holistics

Sign up for a free trial to enable automated data reporting to your work capabilities now! Our simple MongoDB reporting soultion is another example of how the Holistics Data Platform makes data delivery quick and simple, for fast-growing tech-driven companies.

"Holistics is the solution to the increasingly many and complex data requests from the operational teams – reports can be shared across different functions and regions without compromising data security. "

"We had tried using many and more well-known platforms, but in the end chose Holistics as our go-to platform for analyzing and sharing company data reports due to its deceptive ease of use, customizable filters, efficiency, and scalability. Our non-technical teams (marketing, customer happiness, business development, etc.) all love Holistics."

"Holistics has been very helpful in democratizing our data to our Customer Success Managers (CSMs). With Holistics, our CSMs gain real-time insights into our data while not needing to know a single word of SQL. This allows them to focus on their core jobs of ensuring customer retention and upsells. "

"Before finding out about Holistics, analytics was our elephant in the room. We knew it was fundamental for the completion of our platform but didn't have enough resources to work on a robust solution. With Holistics Embedded Analytics we are now able to focus on our core technology and still have a top-notch analytics solution for our clients. It has been key to our current success. "

"My favourite Holistics feature is the ability to email reports on a schedule. Once set, it is fully automatic and the business users can receive their reports right from their email. "

"Our customer (large automotive company) has given us kudos for a great addition to our service which is delivery of application performance report to end users. Good relations with their dealers (which use our application) is key in their business. None of our competitors are close to the quality that we can deliver with Holistics. These are the words from our customer. "

"I can say that we're really very happy with our experience with Holistics, and it's one of our crack tools that we refer to on a regular basis during the day. Before this I needed to usually get our tech team to run queries on our database before I could get an idea of how our sales were doing, so I only ended up looking at items like our sales data once a week or fortnight. "

"Holistics serves two very important purposes for us. First, it's a familiar presentation layer that allows us to quickly pull numbers from our database. Second, it promotes data transparency within our team, by acting as a self-serve platform for other team members. On top of that, Vincent is very attentive and receptive to feedback. "

"As a non-technical director of a mobile app startup, I find Holistics to be a lifesaver in terms of getting me the reports I need, on the fly. The tool works as designed and I use it several times a day. The pricing is fair and Vincent and his team provide lightning fast response to questions and requests. "

"Before we started using Holistics, we at Roomorama were building and maintaining all reports in our admin backend system, which demands great effort from different people to design, develop, test and deploy together in the release plan. Now we can safely manage reports and data requests as fast we can build SQL queries."

Trusted By Happy Customers Around The World!