We decided to review Tableau features to understand the differences with Holistics.

Overall, Tableau is an amazing visualization tool that works well if you already have your datasets properly formatted and cleaned up. While Holistics provides a flexible and scalable BI platform by centralizing the whole data management pipeline and decentralizing data access to everyone in the organization with self-service analytics.

People thought they need to choose between Holistics or Tableau, but in fact Holistics makes an excellent complement to Tableau.

Grab, a ridehailing unicorn startup in SEA with more than 2000 employees, has been using Holistics alongside with Tableau, with Tableau for data visualization, and Holistics for data opertions and data workflow. 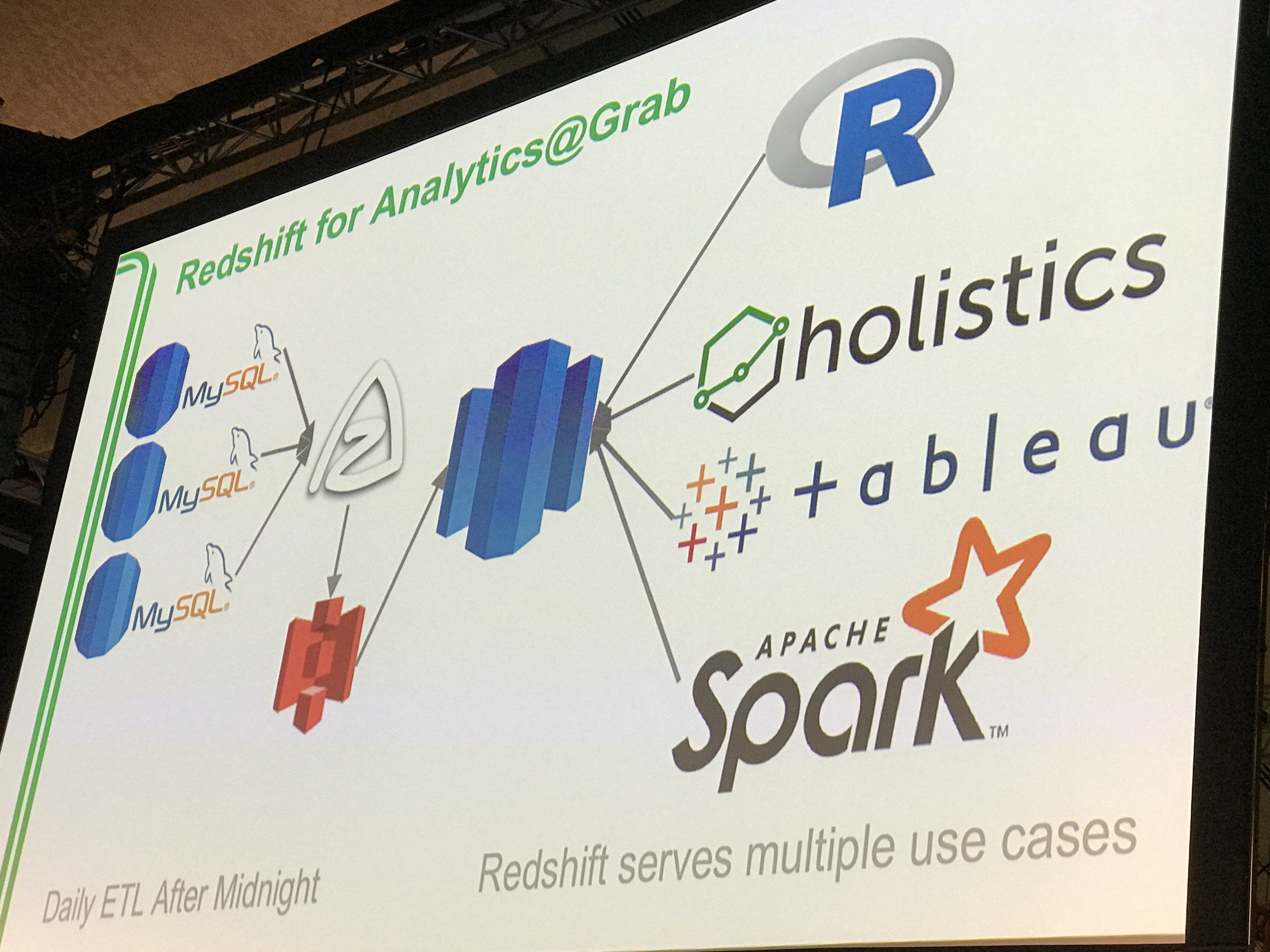 Tableau is a great data visualization tool to help data teams provide senior executives with summarized data. However, there is typically lots of work that data teams need to work on outside Tableau for use-cases that Tableau is not designed for.

These are the 5 key areas that Holistics can help Tableau customers in:

Tableau focus on the tip of the iceberg of data analytics, while Holistics focus on the underlying behind-the-scene work 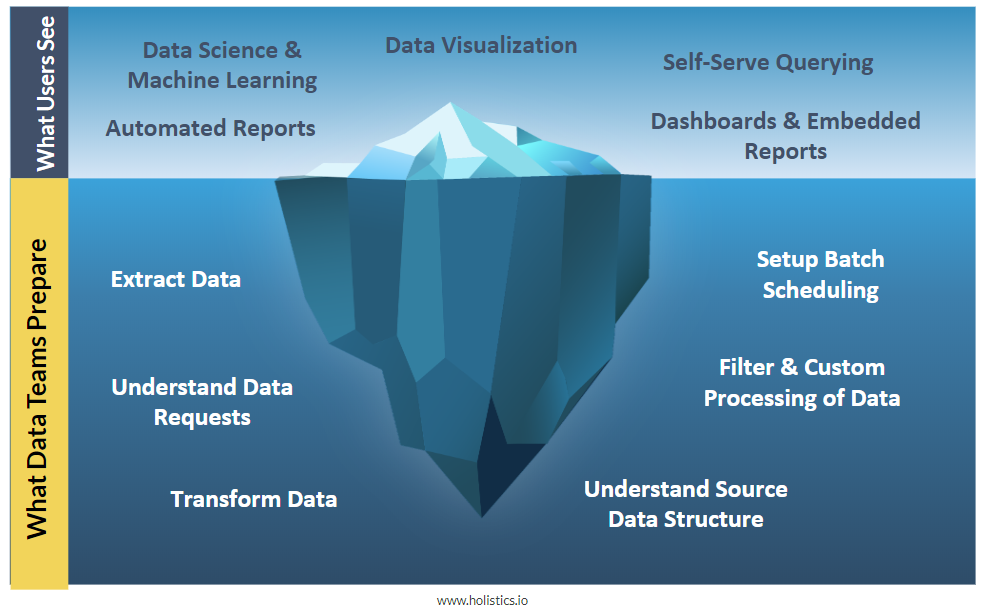 While Tableau makes it easy for data explorers to view and explore dashboards prepared by their data teams, some of them may be overwhelmed by the multiple ways to filter and customize the data shared with them.

As a dashboarding tool, Tableau is easy to use, but there is a learning curve. There’s a lot of functionality to unlock, and, without a significant time investment, you’re just not going to get all the benefit.

This is a typical example of the iceberg issue that goes into preparing automated reports and dashboards. While most business team members only see the tip of the ice-berg (charts, metrics, automated refreshes), the reality is that data teams have to do a lot of work behind the scene to make these data available.

Holistics handles the heavy lifting of the data preparation work beneath the iceberg. Your Tableau reports can run off the data that Holistics has moved and transformed within your own database so your Tableau dashboard continues to show the most up-to-date data.

Tableau is not SQL-friendly, which makes it difficult for some Tableau analysts to run and test adhoc queries. Holistics provides an intuitive data workspace for analysts to run adhoc queries, and also to share it easily with other team members for quick one-off analysis. They can also visualize the results of the SQL queries into an existing dashboard.

Tableau confines you to the web viewing of Tableau platform, while Holistics offers a variety of options to deliver your data to.

If you want more flexibility beyond Tableau’s way of subscribing to dashboard report emails, Holistics allows you to schedule email reports to any recipients of your choice. This lets you sends automated email reports to non-Tableau users.

If you just need to send a temporary dashboard or chart to a third party who does not require full user access to your internal Tableau dashboards on an adhoc basis, you can create the dashboard in Holistics and send them shareable links. These shareable links allow your non-Tableau users to easily access data for the use-case that they need.

Holistics lets you automate and schedule the exports of CSV and Excels into any SFTP destination folder. You can then connect to these spreadsheets using Tableau to run your analysis.

If your team wants to works with live data on Google Sheets, it may not be that easy to do so from Tableau. Holistics can help to automate the export of your database data to a specific Google Sheet link that your team can use for further analysis.

Can I use Holistics without Tableau?

Yes you can choose to use Holistics independently if you do not have a strong need for complex visualizations and storytelling. Because Tableau has been around for so long, we also worked with customers who has already established some dashboard and basic processes around Tableau.

While they are happy with Tableau for the dashboards they have prepared, they see value in Holistics helping them be more productive in their data analytics operation activities, which typically exist outside of Tableau.

In doing so, data teams can free up time and inter-team communication overheads when preparing data for Tableau. The time freed up from insight delivery enables your analyst to now spend more time for business deep-dive, empowering your data teams to be 10x more effective in their daily roles. 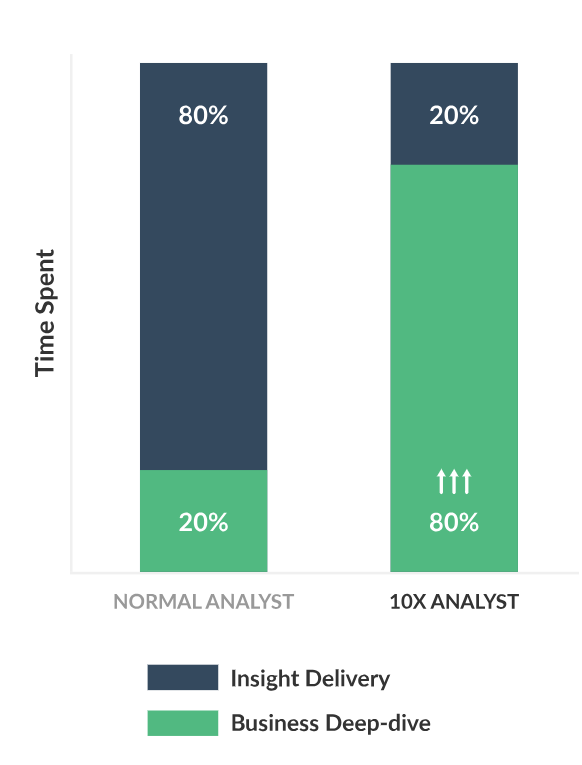 If you do not have any obligation to work with an existing Tableau setup in your organization, you can consider using Holistics independently as a modern BI tool. You can always have Tableau to complement Holistics later on for more variety of visualizations that goes beyond what Holistics offers.

Detailed Comparisons Between Holistics and Tableau